Work has recently started on the so-called ‘re-ordering’ works at the church. Re-ordering essentially involves making changes to the layout and seating arrangements of the church which is often dictated either by changes to liturgical practice within the Church or a desire to make the space more versatile and flexible.

At Holy Trinity this will involve the removal of the fixed pews, taking up the stone pavings/flagstones, re-siting of the font, re-siting of the Rood screen, installing underfloor heating and laying a new limestone floor to the main nave and aisle areas (and relaying of some original flags in the Lady Chapel). New services will be installed including new boiler and electrics.

Prior to works commencing a pre-construction asbestos report identified the presence of asbestos so this had to cleared.

Initial site set up works (i.e. enabling works) included site protection works such as forming ply boxes around vulnerable tombs and head stones in the church yard and protection of various parts of the fabric internally.

Archaeological investigation works form a very important part of such a project and we have been lucky to work with the acclaimed archaeologist Chiz Harwood of Urban Archaeology, who is also working at Gloucester Cathedral at the moment. Chiz is keeping a blog of his work at Minchinhampton and his page is well worth a visit: http://urban-archaeology.blogspot.co.uk

To date, he has made some very special finds as can be seen.

Over the last couple of weeks we have spent time carefully taking up stone flags, reducing levels and exposing some important archaeological features.

Over the next week, or two, the aim is to carry out some structural invention works as well as start the process of importing the base layers (or fill) for the sub-floor construction.

The upper layer of this fill comprises a 150mm layer of recycled foam glass (RFG) which acts as an insulation layer for the underfloor heating system.

The following are a few images taken over the last 3 weeks. 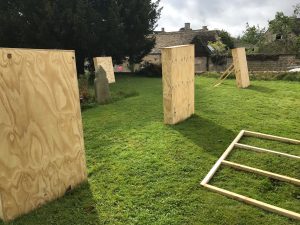 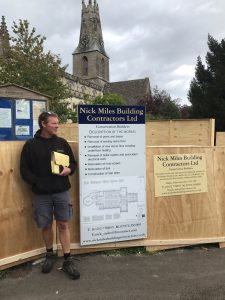 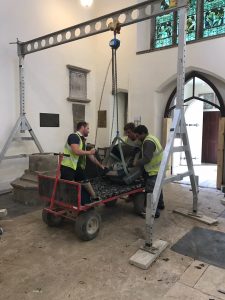 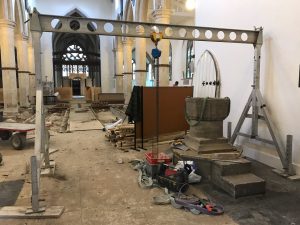 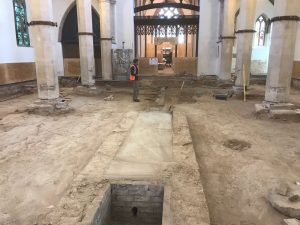 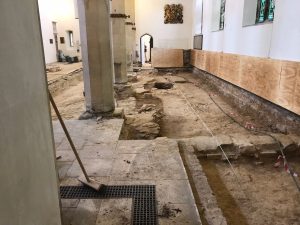 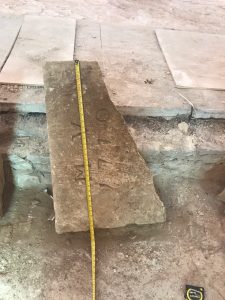 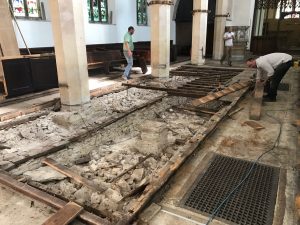 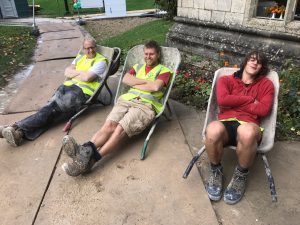 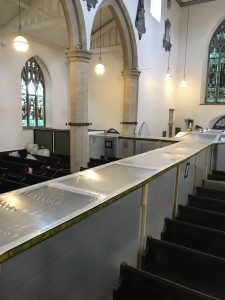 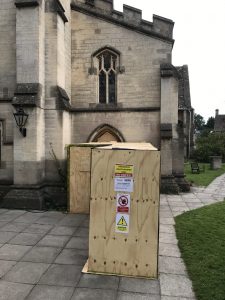 Unfortunately, some unforeseen structural works have had to be carried out over the last couple of weeks involving forming a reinforced concrete slab to bridge over numerous soft spots in the church floor. Engineer, Gary Wood (SFK Consulting) is the project structural engineer and felt a belt and braces approach was required to mitigate any floor settlement in the future. A labyrinth of mesh and steel reinforcing has been laid and a concrete slab cast over a large area of the church floor.

Two ‘finds’ worthy of mention include, an old drainage culvert which runs from north to south under the church floor. It was installed to take rainwater and/or ground water from the north elevation to the south. It is clearly well built and was capped with some very large capping stones which have now been removed and replaced with smaller and stronger prestressed lintels (which now facilitate the floor construction work now in hand).

The second find, is a well-constucted underground water storage tank located under the stone-flag floor of the Sacristy. Discussions are now underway to decide what is the best course of action with this particular feature. 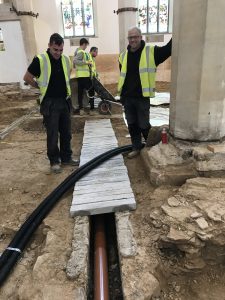 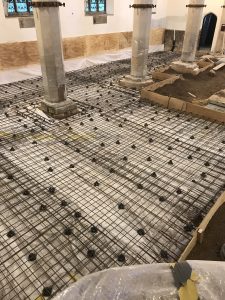 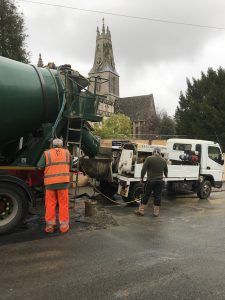 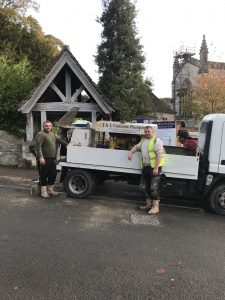